The SALSA panel at this year’s IAAS and BAAS conference addressed the ways in which Spanish (as well as other languages) is used in contemporary American/Américan fiction and sought to challenge the often Anglo-centric direction of such discussions at American Studies conferences on this side of the Atlantic.

As Kiron stated when pulling together this panel, since its inception, American Studies in Ireland and the UK has had to acknowledge an Anglophone bias in its approach to the U.S.—permissible largely because of the U.S.’s own Anglophone bias. Yet, with the U.S. Census Bureau presenting ever more complex snapshots of the country’s current and projected language use, it is becoming increasingly important to ask whether it is possible to understand the U.S. imagination monolingually. How can we accurately study contemporary U.S. culture without attentiveness to the more than 148% increase in domestic use of languages other than English since 1980? Without a multilingual approach, what is American Studies letting slip? The Census Bureau has noted that the increase actually disguises a major decline in speakers of Polish, German, and Italian—and that the projected growth in Spanish speakers will arise from U.S. births rather than new immigrant arrivals. Without multilingualism, is American Studies implicated in an assimilationist Anglocentrism?

Our panel, sponsored by us here at the SALSA Collective, aimed to build on the growing interest in U.S. multilingualism by addressing the role of Spanish in contemporary U.S. writing. The four panellists presented their research on writing in English, Spanish, and Spanglish, and discuss how approaching contemporary U.S. culture with a sensitivity to multiple languages can provide new and vital insights that monolingualism risks occluding.

I provided an introduction to the panel by discussing the gendering of language – explicitly in Spanish with the a/o/@/x endings and implicitly, but just as pervasively, in English. I also gave some examples of the ways in which Chicana feminists destabilise the patriarchal script in their writing through the use of multiple languages. This lead interestingly into Kiron’s talk about Leslie Marmon Silko’s Almanac of the Dead and his compelling argument to read the work bilingually: his reading opens up the text to a more nuanced understanding of Silko’s work.

Maria then spoke to us about multilingualism in Junot Díaz’s The Brief Wondrous Life of Oscar Wao, discussing the ways in which Díaz’s writing is influenced by and influences the ‘linguiscape’ – the linguistic environment – of the United States. Finally, Leona’s paper explored Ana Castillo’s The Mixquiahuala Letters and Massacre of the Dreamers and traced connections and disconnections between these two works. Leona not only discussed the bilingualism of Castillo’s works, but also argued that the disruption of narrative forms is a means of resistance.

We were truly grateful to Zalfa for chairing our panel – especially after her excellent paper on border thinking that spoke to many of themes and ideas that were presented in papers and in the super interesting questions and discussion after the papers. 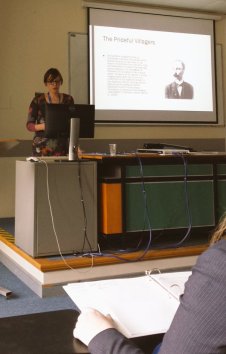 Gracias a toda/o/@/x la gente who came to listen and engage in this wonderful discussion.

What a great conference – thanks to everyone who organised this year’s IAAS and BAAS conference! Check out #IBAAS16 to see what everyone was talking about on Twitter.

I was so thrilled with the SALSA panel: ¡fue un gran éxito!

I would also like to thank the Trustees at The Fran Trust for supporting my attendance at this conference – they are a fantastic organisation and I am truly grateful for their help.

Find out more at: https://www.foundationscotland.org.uk/programmes/fran-trust.aspx