As with so many other passions and hobbies, you cannot explain where they are coming from as long as you do not simply inherit them from your family. For this reason, I have no idea where my lifelong interest in Spanish speaking countries, cultures and people has come from. Fact is, my soft spot for Latin American matters has always been present and shapes my life up to today.

At university I majored in North American Studies, but these studies focused almost exclusively on the United States of America. I have always had an interest in the culture of so-called ‘minorities’, the “underdogs” worldwide, but also in an Anglo-American dominated culture. They did not play a prominent role in our studies, though. If minorities ever were a part of discussions or even managed to get a class dedicated to them, it was on Native Americans or African Americans. Sometimes Asian Americans were mentioned in relation to their situation after World War II. Latin Americans of any kind never played a role. This was something I missed in my education.
Upon coming back from my exchange year, you can imagine my joy, when I heard of a new professor, who offered a course exclusively on Chicano Literature. Until today I have not regretted taking this course for a second. We read “Bless me Última” and “Heart of Aztlan” by Rudolfo Anaya, “So far from God” by Ana Castillo, “The Rain God” by Arturo Islas, and some short stories, e.g. by Helena Viramontes. Our teacher was most dedicated, we had lots of open and fruitful discussions, and my interest in this literature and culture was sparked even more.

Finally I knew it was not only a flaky idea and I was fascinated even more by these cultures within the United States after having read some of their works, learned more about their situation on a deeper level and got to know some first details of their culture, like what components of it are the most important ones. I kept enjoying reading Chican@ books, with their style influenced by their oral tradition, and the myths and legends that Chican@s grew up with. All of these factors help their work and culture to come alive to me.
After my stay abroad I had another reason, though, to dive into ChicanX Studies, their living situation, environment, and how they have dealt with it. I had just spent ten months in Turkey, lived in several cities there and met many wonderful people. Before this stay I had been aware and heard of many of their customs, traditions or habits because of the Turkish population in Germany. After having been in their country, where I had the opportunity to dive into their culture completely and hear of the reasoning behind habits and beliefs, I could understand more of their way of life.
Within this process I started to see the similarities between the Turkish minority in Germany and Chicanos in the USA: both are the biggest minorities of the respective country, both usually hold close ties to their home countries; Turkish and Mexican people often stay in barrios dominated by their ethnicity, try to live according to their own culture, take quarrels of religion or villages to their new country, and fear too much assimilation, especially when it comes to their children. Leaving aside those Chicanos who became American citizens because of the Treaty of Guadalupe Hidalgo, even their reasons for migration were similar: like the Chicanos coming to the USA within the Bracero program, Turkish citizens came to Germany in the 1960s and 1970s as “Gastarbeiter” (guest workers), many of them staying until today. 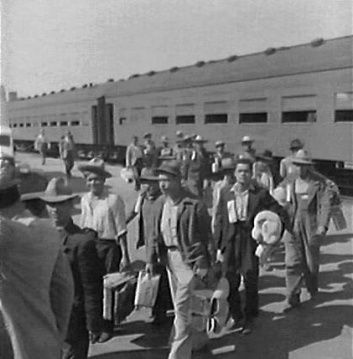 The first Braceros arriving in Los Angeles by train in 1942 https://commons.wikimedia.org/wiki/File:BraceroProgram.jpg
It has probably become obvious now that besides the literature in itself, the second highly important aspect to me is the interconnection of cultures, in this case the Mexican culture with the Chicano culture and the Anglo-American culture. From my point of view, all human behavior is based on some kind of cultural background. To understand someone’s behavior I have to know their culture.

Diversity is caused and can only be upheld if diverse cultural backgrounds are maintained. Many Chicanx authors follow the same approach; in their stories and books they include cultural characteristics to have them remembered and passed on to the next generation. When concluding my thesis, I hope to have found an answer to the question of what means are used for approaching this generation of children, teenagers and young adults to awaken and maintain the interest in their culture, learn about its whole dimension and in fact pass on these cultural traits to friends, family and later on their own offspring.
Therefore, I feel that my academic project, as limited as it is to Chicanos, can also be generalized to cover minorities that have a long history in a surrounding dominated by a different ethnicity and that try to find their own way of handling the situation between keeping their original culture, integrating, assimilating and forming a new culture that is a mix of their original culture and that of their new home.
For all of these reasons, I was not “done” with Chicano literature or studies after my class at university, but rather felt that there is a huge mountain of cultural aspects, literary gems and inspiring authors I still wanted to discover for myself and explore. Up to today I cannot say that I have been disappointed. Rather, I feel that I will never ever be able to do more than scratch the surface, but this surface is a beautiful one, interesting and unique, original and exciting. It makes me struggle to ever finish my PhD thesis; within almost every book I read, I find another aspect I feel is worth exploring, mentioning and explaining.

Sarah Jenischewski is a PhD candidate at the University of Bonn in Germany.