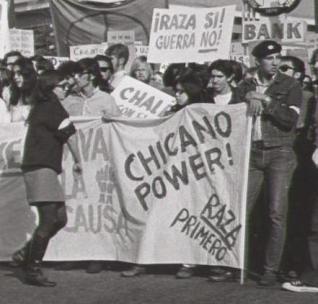 Students have long played a prominent role in social and political activism. On the afternoon of February 1, 1960, four students from North Carolina Agricultural and Technical State University, a black college in Greensboro, North Carolina, entered the local Woolworth’s department store where they were refused service at the lunch counter, an area reserved for whites only. Told that they could not be served, they remained in their seats until the store closed only to return – and be refused service – again and again. As the protest continued, other students, including local whites, joined in. More than any other event, the Greensboro sit-in—a student led campaign—launched the 1960s Civil Rights Movement.

A process of self-determination for Mexican Americans, the Chicano Movement of the mid ‘60s and ‘70s flourished as part of the Civil Rights Movement; it emphasized pride in both the Mexican past and the new Chicano culture that had arisen in the United States. Popularized during the 1960s, the term Chicano, represented those who were of Mexican descent, regardless of whether they were born in the United States or Mexico. The emergence of this Cultural Nationalism, which focused on the group’s cultural elements gave rise to a collective identity, community and sense of peoplehood.

Students also played a key role here. It was students who adopted the name Chicano, which had historically been used pejoratively to describe lower class Mexicans. The local student activisms taking place alongside the national political upheavals of the 1960s created a framework for student activist organizations to become full force Movements.

On March 3rd of 1968, Abraham Lincoln High School, a predominantly Mexican American school in East Los Angeles, had a walkout in which over a thousand students walked out of their classrooms. The students rallied with picket signs that spoke out against racist school policies and teachers. The students also called out for the hiring of more Mexican American teachers and administrators and the incorporation of Mexican American history and culture into the school curriculum. With over ten thousand students participating from schools throughout LA, this walkout became the largest student demonstration in the nation; encouraging other walkouts throughout the southwest and Midwest.

The strike was more than a demand for quality education; it simultaneously protested against racism towards Mexican Americans. It was the first time that students of Mexican American descent had created their own demonstration against racism and for educational change. The student strike gave rise to a new political awareness. The strikes have been described by author Carlos Muñoz as the “first loud cry for Chicano Power and self-determination”.

Despite the strength and determination shown during the Chicano Student Movement, it is important to recognize that there were internal disputes and disagreements about the focus of the Movement. The issue of gender was one such contentious point.

As part of their Labor and Civil Rights project The University of Washington has been gathering oral histories from members of the Movimiento Estudiantil Chicana/Chicano de Aztlan (MEChA) and have unearthed some interesting truths about how women were treated in the early days of the Chicano Student Movement.

One member, Ernesto Gamboa recalls that: “As big as our hearts were, in some respects we were very ignorant. So we assigned to women the same roles that we were familiar with.”

Yolanda Alaniz, an influential member in Chicana/o rights organizations like MEChA, Brown Berets, and Las Chicanas, attended UW in 1969; she recalls her days in the Movement and the sexism she encountered:

“Everybody was learning. […] On the woman question, you know, they didn’t know their head from their toes. And so didn’t we. I mean we didn’t know. We were learning as well as we were going along. And we were assigned to do the cooking and the typing. Not to talk at mass meetings, not to talk at demonstrations. That wasn’t our role.”

To hear more of Yolanda’s (and those of her compadres/madres) story go here; http://depts.washington.edu/civilr/alaniz.htm

Oppressive patriarchal traditions were being experienced by women from across the United States and even in a liberal, lefty organization like MEChA sexist attitudes towards the roles of women prevailed. Yolanda’s charitable response that it was a time when everyone was learning, men and women alike, tallies with other Chicanas responses at the time when they understood, to a certain degree, that the priority was to focus on the collective goals of Chicano Movement.

As the slogan goes, they were ‘¡Chicano Primero!’, women later.

Writer and activist Vicki Ruiz remembers that: “From the early days of the student Movement, women were not always satisfied with the rhetoric and praxis of their compañeros, but those who called for the introduction of women’s issues on the collective agenda or for an end to gender-specific tasks (e.g. typing, cooking, cleaning up) were labelled ‘Women’s Libbers’ or ‘agringadas’ [like a foreigner, like a gringo], and open ridicule had a chilling effect. […] At times biting their lips, most Chicana feminists chose to remain involved in the Movimiento.”

The legacy of the Chicano Student Movement remains influential to this day, and helps shape a Chicano/a consciousness for subsequent generations of Mexican Americans.

Check out our Twitter for news about ongoing activism in the Latino/a community.

For more on the UW project, check out their multi-media web site which brings the vital history of Seattle’s civil rights Movements to life with scores of video oral histories, hundreds of rare photographs, documents, Movement histories, and personal biographies. Based at the University of Washington, the Seattle Civil Rights and Labor History Project is a collaboration between community groups and UW faculty and students.

3 thoughts on “¡Chicano Primero! Student activism and the Chicano/a Movement”